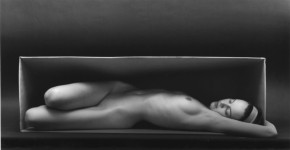 Ruth Bernhard was born in Berlin in 1905. In 1927, after two years at the Berlin Academy of Art, Ruth moved to New York where she began to seriously pursue a career in photography. Eight years later she met Edward Weston in California and was deeply moved by his work. He revealed to her the profound creative potential of photography and its artistic implications. Desiring to work with him, she moved to the West Coast shortly thereafter.

In 1953, she moved to San Francisco and became a colleague of Ansel Adams, Imogen Cunningham, Minor White and Wynn Bullock. She has lectured and conducted master classes throughout the United States through her 95th birthday.

Ruth Bernhard’s work can be found in most major museum collections throughout the world, including the George Eastman House, Museum of Modern Art in New York, The Metropolitan Museum of Art and the Bibliotheque Nationale in Paris. Her photographs have been shown internationally in major exhibitions for over fifty years and widely published. In 1986, Photography West published an acclaimed monograph of her nudes entitled The Eternal Body which received Photography Book of the Year and brought Bernhard widespread acclaim as a photographer of the nude.