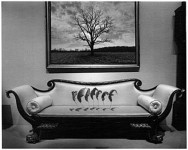 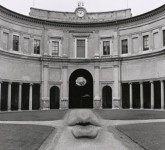 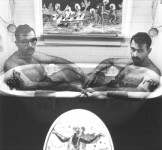 Uelsmann was born in Detroit, Michigan. While attending public schools, at the age of fourteen, there sparked an interest in photography. He believed that through photography he could exist outside of himself, to live in a world captured through the lens. Despite poor grades, he managed to land a few jobs, primarily photographs of models. Eventually Uelsmann went on to earn a BA from the Rochester Institute of Technology and M.S. and M.F.A. degrees from Indiana University. Soon after, he began teaching photography at the University of Florida in 1960. In 1967, Uelsmann had his first solo exhibit at The Museum of Modern Art which opened doors for his photography career.[1]

Uelsmann is a master printer, producing composite photographs with multiple negatives and extensive darkroom work. He uses up to a dozen enlargers at a time to produce his final images, and has a large archive of negatives that he has shot over the years. Uelsmann does not carry multiple attachments, but only one camera, “Most photographers I know carry many cameras with multiple attachments. I carry one. Most photographers I know have one enlarger. I have half a dozen.” When beginning to create one of his photomontages, he has a strong intuitive sense of what he’s looking for, some strategy for how to find it, and an understanding that mistakes inevitable and are part of the creative process. His process begins after a day of shooting. He returns to his work station in his home and covers a large drafting table with hundreds of proof sheets. He folds and overlaps various contact prints, explores the visual possibilities, then brings the options into his darkroom. He then sets his selected pieces into the large number of enlargers that he owns in his darkroom, and moves the photo paper progressively down the line, building up an image.[2] The negatives that Uelsmann uses are known to reappear within his work, acting as a focal point in one work, and background as another. Similar in technique to Rejlander, Uelsmann is a champion of the idea that the final image need not be tied to a single negative, and may be composed of many. During the mid-twentieth century, when photography was still being defined, Uelsmann didn’t care about the boundaries given by the Photo Secessionists or other realists at the time, he simply wished to share with the viewer, the images from his imagination and saw photomontage as the means by which to do so. Unlike Rejlander, though, he does not seek to create narratives, but rather “allegorical surrealist imagery of the unfathomable”.