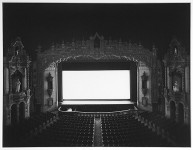 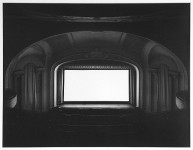 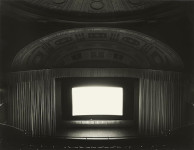 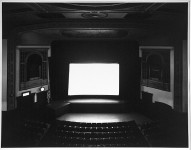 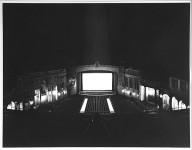 Comments by the photographer about the theater series:
“I’m a habitual self-interlocutor. Around the time I started photographing at the Natural

History Museum, one evening I had a near-hallucinatory vision. The question-and-

answer session that led up to this vision went something like this: Suppose you shoot a

whole movie in a single frame? And the answer: You get a shining screen. Immediately I

sprang into action, experimenting toward realizing this vision. Dressed up as a tourist, I

walked into a cheap cinema in the East Village with a large-format camera. As soon as

the movie started, I fixed the shutter at a wide-open aperture, and two hours later when

the movie finished, I clicked the shutter closed. That evening, I developed the film, and

the vision exploded behind my eyes.”

Hiroshi Sugimoto was born in Japan in 1948. A photographer since the 1970s, his work deals with history and temporal existence by investigating themes of time, empiricism, and metaphysics. His primary series include: Seascapes, Theaters, Dioramas, Portraits (of Madame Tussaud’s wax figures), Architecture, Colors of Shadow, Conceptual Forms and Lightning Fields. Sugimoto has received a number of grants and fellowships, and his work is held in the collections of the Tate Gallery, the Museum of Contemporary Art, Chicago, and the Metropolitan Museum of New York, among many others.